A troupe of terminally woke teaching artists scramble to create a pageant that somehow manages to celebrate both turkey day and Native American History Month.

A New Season Of Exceptional Theatre

This critically acclaimed play was written by Larissa FastHorse and is directed by Jeanette Godoy. It highlights the cultural significance and appropriation of the Thanksgiving holiday.  This production is the first of Southern Rep’s new 2021-22 MainStage lineup, to be announced soon.

The Thanksgiving Play is a site-specific production presented in the Design Studio at Loyola University’s Department of Theatre Arts and Dance in Monroe Hall.

An Ideal Play For A Long-Awaited Opening

In this regional premiere, four white people try to devise a politically correct First Thanksgiving school play for Native American Heritage Month.  The director, Logan, hires a Native American actor as their cultural compass.  As Logan, Jaxton and Caden defer to her for guidance, it is revealed that she is white and only plays Native American when she isn’t playing other ethnicities. Without the Native voice, these white people must find their way through a crazy thicket of privilege, historical accuracy and school district rules.

Audience members over age 12 must present proof of vaccination, or a negative PRC test taken within the last 72 hours, and wear a mask throughout the show.   All performers are fully vaccinated and spaced apart from the audience.   Southern Rep staff and crew other than performers will be masked.

Attend A Pop-Up:  Bulbancha, We Are Power, Celebrating Our Native Community, Ancestry and Mother Earth

In conjunction with The Thanksgiving Play, Southern Rep presents an opportunity to meet cast members, show support for the local indigenous community and shop with vendors such as Bulbancha Collective, Recirculating Farms and others.  No registration is needed. 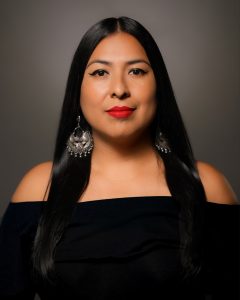 Jeanette Godoy is an Indigenous Director and Interdisciplinary Artivist (Actor, Costume Designer and Social Justice Educator).  She was raised in Inglewood, California, and received her BA in Liberal Studies with a Specializationin Chicana/o Studies from San Diego State University.

Jeanette also holds a BCLAD Multiple Subject Teaching Credential and an MFA in Theater with a double focus in Acting and Costume Design from UCLA’s School of Theater, Film and Television.  Most recently, Jeanette has taught Theatre for the 21st Century at California State University, Long Beach, and has directed ensemble productions for the Acting and Performance Summer Institute (APSI) at UCLA and the Hollywood Fringe Festival.

As an Actor and Theatre Project, AFI, UCLA, Project Involve-Film Independent, Ghetto Film School and Lodo Productions. Jeanette is founder of TIZAPAPALOTL Productions which focuses on film and theatre for social justice, and is owner of LA PACHUCADA, which specializes in vintage and recycled clothing. You can follow her work via IG: @misskahlo “Nimitz tlacuiquilia ica noche nohc yohlotzi, ome yocan”- OMETEOTL.

As we present A Thanksgiving Play, Southern Rep is mindful that we are on occupied Choctaw and Chitimacha land.  We show reverence to our ancestors and the original people of this land.  Native American History Month is observed in November.

.  American Indian and Alaska Native population is 7.1 million as of 2020.

.  There are 324 distinct, federally recognized American Indian reservations in 2020.

.  But it wasn’t until 1924 when all Native Americans were granted citizenship, as Congress enacted the Indian Citizenship Act.

.  Wondering about the most respectful term for Native Americans?  Many institutions still refer to Indigenous peoples as American Indian and Alaska Native.  Since the 1960s, American Indian has been seen as a misnomer, sometimes carrying racist connotations.  Native American has became the preferred term of reference.